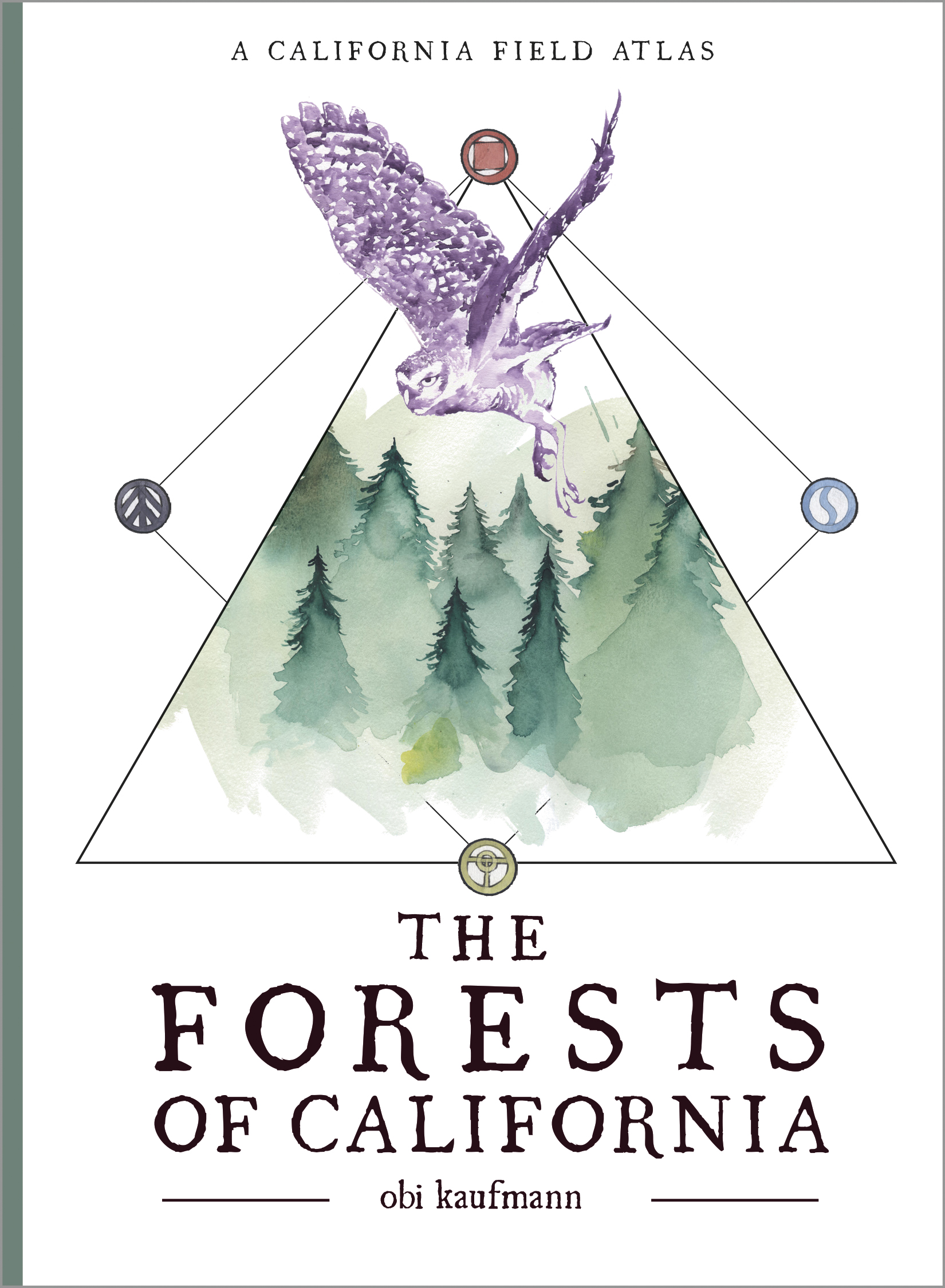 The Forests of California, by Obi Kaufmann, released in September 2020 by Heyday Books

Obi Kaufmann, who brought us The California Field Atlas (#1 San Francisco Chronicle Best Seller) presents another major work, The Forests of California. This is the third of six books in Kaufmann’s planned series exploring the state’s diverse environment and is the first of his planned “California Lands” trilogy.

An atlas is a collection of maps, illustrations and text. A field atlas is designed to be used in the ‘field’ as an ongoing resource, and Kaufmann gives us something rich, distinctive and fascinating. Dive in wherever you like to find a page that engages and keeps you turning more pages, or if you prefer, stop to learn more about a specific forest or tree in California. This book is not just a reference tool, but could be seen as an invitation to think differently about habitat, vegitative alliances and the hope we can hold through better understanding of our relationship to place.

Read the full review on Yubanet.com

Listen to the interview on LitQuake 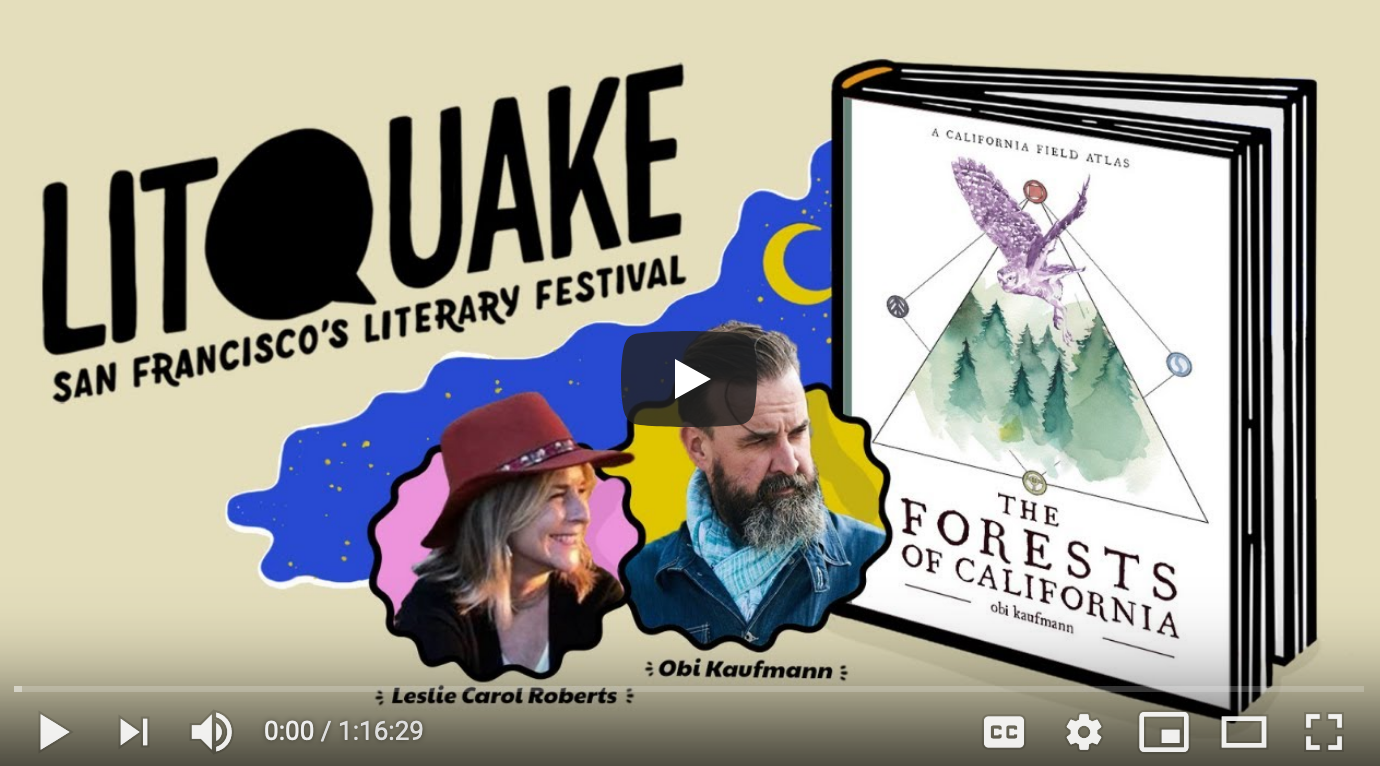 Note: Perhaps the most important book I’ve read this year…full of new ways to think, explore, understand, and deepen relationships with the natural world. 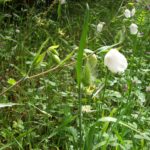 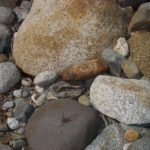 There is so much writing to be done, places to explore and moments to be shared, I find it hard to dedicate a wee bit of time to discuss unfolding life, here in this blog. So forgive me and let me shortcut to the heart of what’s at hand without further fanfare.

This season I’ve been excited to get several commemorative poems written, and (bonus!), published. At last something useful to do with poetry: save cherished moments and honor dear friends at the same time. The California State Poetry Society published ‘On Becoming 21st Century Women’ this fall and will soon publish ‘Persimmon Pudding’—a winter poem set in Tahoe. These quarterly books are available to order at CaliforniaStatePoetrySociety.org. 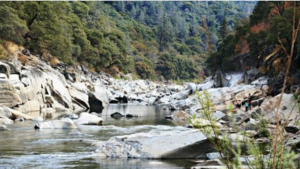 The 16th Annual Wild & Scenic opens January 11. Read about how and why the South Yuba River Citizen’s League was formed here, in Sierra Living magazine. Sierra Living was formerly Sierra Heritage magazine and this new publication sets a fresh tone, while retaining cultural content. Learn more about the lasting impact of the Wild & Scenic Film Festival and other projects being used at models in other places here, at community supported news source, Yubanet.com.

My poetry chapbook, Swimming into Sunsets is now for sale at The Bookseller, Gold Creek Inn and at the Nevada City Chamber of Commerce office. A percentage of profits are designated to support Yuba River conservation by donation to SYRCL. This book is also available on iTunes as an iBook here. 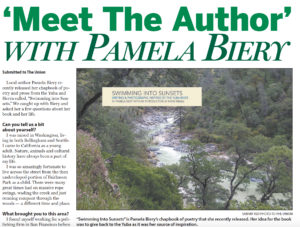 Finally, thank you to The Union for this very nice opportunity to have my say, in the kindest way—in my own words. This ‘Meet the Author’ column is a bit humbling. Appreciate this and new city reporter, Matt Pera.

END_OF_DOCUMENT_TOKEN_TO_BE_REPLACED 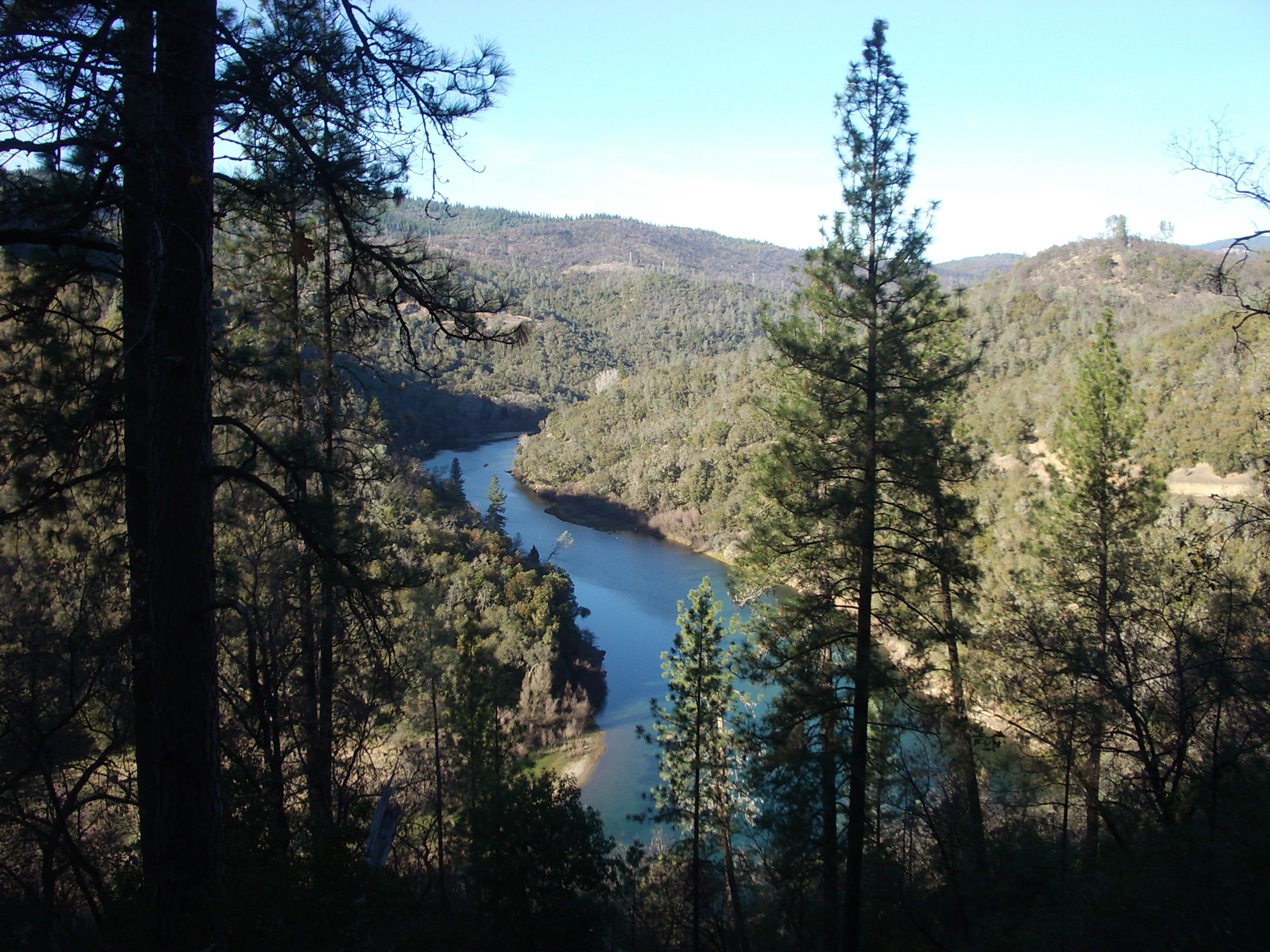 END_OF_DOCUMENT_TOKEN_TO_BE_REPLACED

Bill McKibben describes Tzeporah Berman as ‘a modern environmental hero.’ I like to think of her as a radical pragmatist. “This Crazy Time” is an autobiographical memoir of an effective eco-campaigner who has spent the past 18 years evolving from a student practicing civil disobedience to a key negotiator, leveraging vital policies and agreements with global corporations, government and environmental allies. Berman has been recognized by Utne Reader as one of 50 Visionaries Who Are Changing the World. This spring she assumed Greenpeace International’s co-head of the climate and energy campaign.

END_OF_DOCUMENT_TOKEN_TO_BE_REPLACED

In 1988, a filmmaker stumbled on a group of people sticking to their hippie values in Eastern Washington. Fast forward to the new century, and he finds that they are still keeping on keepin’ on.

In 1988, a young Seattle filmmaker took a road trip and along the way found what then seemed like a nearly extinct breed: flower children. Director Kevin Tomlinson had wandered into the “Healing Gathering,” an annual campout and get-together in the backcountry of Eastern Washington.

END_OF_DOCUMENT_TOKEN_TO_BE_REPLACED

A Discussion at the Hamptons Institute, July 16, 2011
Presented by Guild Hall in Collaboration with the Roosevelt Institute

Televised on CSPAN and available online at YouTube, this conversation  between new media leaders includes some worthy perceptions and conclusions about the long arc of digital technology. The forum’s focus delves into how consumers and brands are connecting through new platforms and looks at what may be next in digital media.

In discussion are Christine Cook, SVP Advertising Sales of The Daily, David Steward, President and COO of 20×200/Jen Bekman Projects, Michael Kelley, Chief Marketing Officer of AdGenesis, Anthony Risicotto, General Manager, Tremor Media and moderator Michael Gutkowski of Hearst Corporation.  Each of these panelists has invested more than a decade as executives in key technology roles for multiple corporations—each are contributing innovations and tools that are advancing the digital conversation.

END_OF_DOCUMENT_TOKEN_TO_BE_REPLACED

I was invited by EcoMaven Alex Steele to participate in U2’s Green Team–Seattle was the 5th city on the concert tour to implement an on ground crew to encourage recycling and educate on green initiatives designed to reduce the U2 tour carbon footprint.  Effect Partners, a Minneapolis, Minnesota company that is occupying the unique space of turning intentions into actions, orchestrated the U2 Green Team effort. Other Effect Partners projects include making recycled plastic shirts for the Black-Eyed Peas, “So Much to Save” initiative for the Dave Matthews Band and Jack Johnson’s “All at Once” encouraging individual action. Bono and U2 were even better than the real thing.

END_OF_DOCUMENT_TOKEN_TO_BE_REPLACED

In January 2006 I interviewed Julia Butterfly at the Wild and Scenic Environmental Film Festival in Nevada City, California. I walked away from this interview with hope and commitment to change that I still carry today, so this Earth Day, I’d like to revisit Julia Butterfly and her inspiring words.

Over 6.5 million trees were cut down to make 16 billion paper cups used by US consumers in 2006, using 4 billion gallons of water and resulting in 253 million pounds of waste.